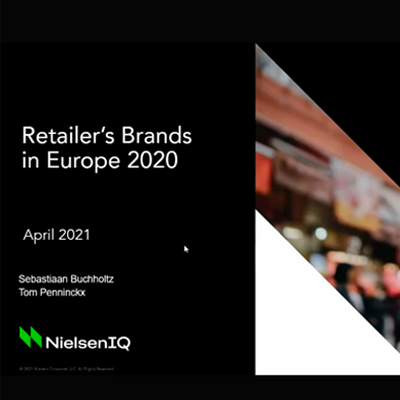 What are the latest developments of private label and FMCG in Europe? Research firm Nielsen IQ analyzes countries and categories, and gives an outlook for the years ahead. For more details on the latest private label data, go to plmainternational.com/yearbook. Click here to view video. 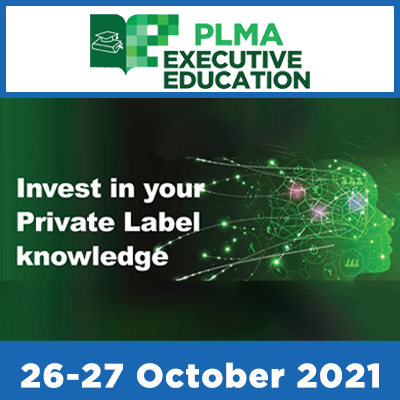 PLMA’s Executive Education Programme, presented in conjunction with Nyenrode Business Universiteit, will be held online on 26-27 October 2021. The programme is devoted to operational aspects, challenges, and opportunities of the private label industry.

Manufacturers and retailers will be provided with the opportunity to build their private label knowledge by attending lectures and interactive sessions on a variety of subjects. The curriculum covers what executives need to know about private label strategy, manufacturer-retailer relations, new product development, consumer trends, marketing and e-commerce, among other important issues. 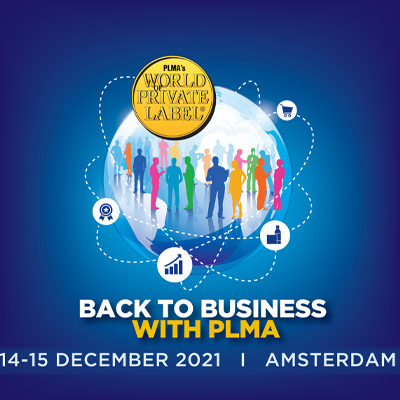 As the Dutch government announced it is easing COVID-19 restrictions and the first international trade show has already opened its doors at the RAI Exhibition Centre, PLMA’s “World of Private Label” International Trade Show will return to Amsterdam on 14 and 15 December.

“These new measures pave the way for international business gatherings,” PLMA President Peggy Davies said. “I look forward to hearing the buzz of in-person conversations between exhibitors and visitors. We all missed the energy and the dynamics of a live trade show.”

“Back to Business” is the theme of this year’s “World of Private Label.” The theme is exceptionally appropriate, as the need to develop contacts and sharing ideas has never been greater. More than 1,700 private label manufacturers from 65 countries have already registered as exhibitors. PLMA expects to welcome nearly 2,000 exhibitors in December, including 45 national and regional pavilions from 30 countries.

Although many restrictions have been eased, PLMA continues its focus on a safe trade show, including extra-wide aisles that will allow international buyers to safely and conveniently walk the show to discover new products and new suppliers. For more details on this year’s show, including on health & safety measures, click here.

Less Sugar a Goal of Consumers Around the World 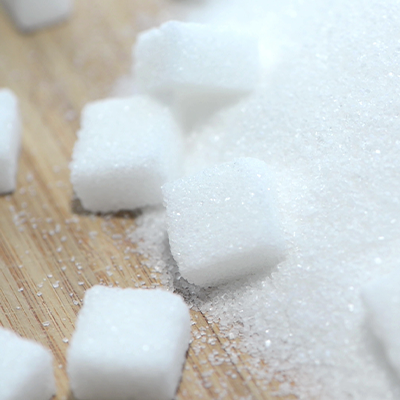 Consumers are increasingly citing sugar reduction as one of their top health priorities, particularly when it comes to weight management, according to Euromonitor research.  More than half (53%) of consumers surveyed globally cited “Eat less sugar” as their preferred method of weight loss.

When asked about reasons for avoiding sugar in 2020, 58% of respondents cited a general avoidance stating that it was simply, “better for me to avoid it,”  followed by it “makes me feel healthier,” noted by 57% of respondents.

The company says that in recognition of sugar concerns, the prevalence of claims such as ‘no added sugar,’ 'no sugar' and 'low sugar' are likely to grow as manufacturers aim to reassure consumers and differentiate themselves. 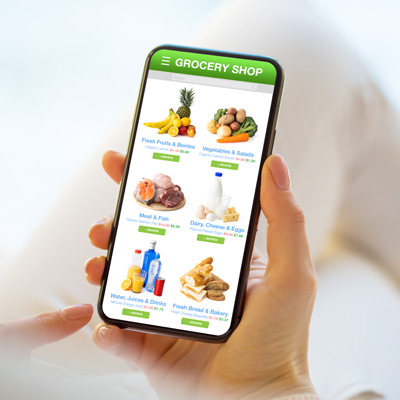 Online shopping for food has grown during the pandemic and a new survey in Sweden shows that almost seven out of ten online customers there believe they will continue to buy food online even after restrictions are eased. More than every third Swede (39 percent) has shopped for food online since the outbreak of the pandemic, according to a survey conducted by Demoskop on behalf of Coop. Of those who have shopped online since the outbreak of the pandemic, the majority (68 percent) believe that they will continue to do so when the restrictions are eased. However, every third person (33 percent) says that they will not continue to shop online to the same extent as during the pandemic.

The survey reveals that more women (45 percent) than men (32 percent) have shopped for food online since the outbreak of the pandemic. On the other hand, when looking at their attitude to continue shopping for food online, there is no difference between men and women - there is an equal proportion who say that they will continue to shop online (69 and 68 percent, respectively). The age group 35-44 is most positive about continuing to buy food online.
Plus and Coop Merger to Produce a 10% market share 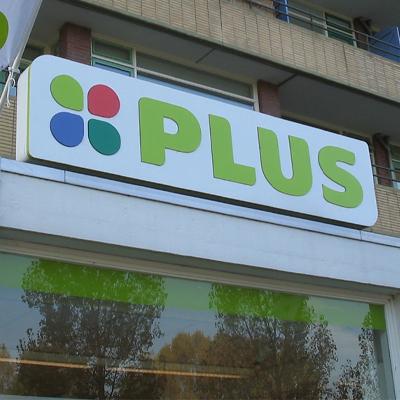 Supermarket chains Plus and Coop have announced they will merge and continue under the name of Plus. The consolidation will create a company with a turnover of five billion euros and 550 stores. This will make it the third largest supermarket chain in The Netherlands after market leader Albert Heijn and Jumbo. Albert Heijn has a market share of 35%, Jumbo 21.5% and the merged Plus will have a market share of 10%.

Experts view the merge a logical step in view of retailers’ need for high investments in IT, robotics and technology. The amounts needed are simply too high for smaller players and these are likely to disappear from the retail landscape in the future. The merger will save the new Plus around 50 million euros annually. The merger is subject to the usual conditions, like approval by the competition authorities, and is expected to close in early 2022.
Lidl Launches ‘With love local’ Line 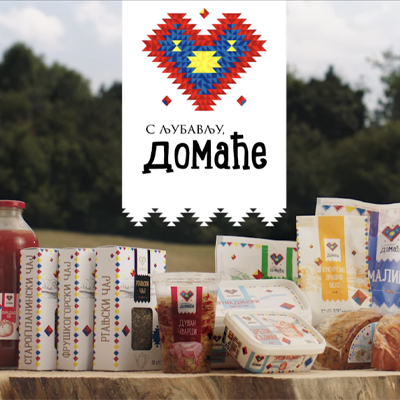 In other countries, the retailer boosts local sourcing as well. In France, domestically sourced products are labeled “Origine France” and the company says that 72% of the range comes from French suppliers. In Spain, it emphasizes the ties with regional producers from, for example, the Basque country with the slogan "Euskalduna da, ona da" (It’s Basque, it’s good) and on the Balearic Islands it uses the slogan “És Balear, ES Bo” (It’s Balearic, it’s good). In Sweden, the retailer set up a special "Fast Track" program for smaller suppliers, which accelerates the listing process. 280 items are currently certified with the "Från Sverige" (from Sweden) seal of origin.

The focus on local is part of Lidl’s commitment to shorten the supply chain in order to work more sustainably. In addition, it helps the company establish good relationships with customers and suppliers within the countries that it operates. Worldwide, Lidl has 11,200 stores in 29 countries. 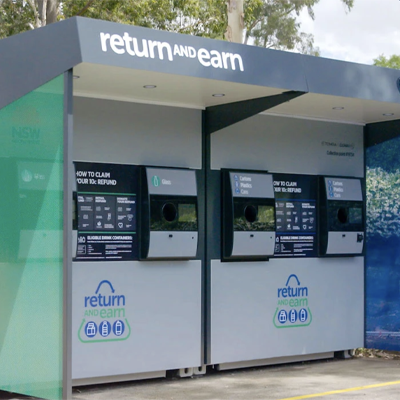 A European Citizens Initiative has called for the introduction of reverse vending machines for plastic bottles in supermarkets. The campaigners have called on the EU Commission to implement an EU-wide deposit scheme to recycle plastic bottles.

The #ReturnthePlastics initiative comes in response to the negative impact of plastic pollution on the environment, animals and humans. When plastics are not recycled or collected, they end up in landfills or waterways before entering the ocean.

On 3 July 2021, the EU Directive on single-se plastics came into force. However, the Directive, which bans the 10 most common single-use plastic items, such as plates, cutlery and straws – in Member States, does not include plastic bottles.

Some EU countries have had a deposit return scheme (DRS) for plastic bottles for many years. Norway, Sweden, Finland, Denmark and Germany are frontrunners. They have achieved recovery rates of 90% after implementing their deposit systems. Other countries have indicated that they will introduce a system in the coming years. There are also a few countries that have not yet started a debate regarding the introduction of DRS on their territory.

The organizers of the initiative need to get the support of at least 1m EU citizens, with minimum numbers in at least seven Member States, within a one-year period before the Commission considers legislation. 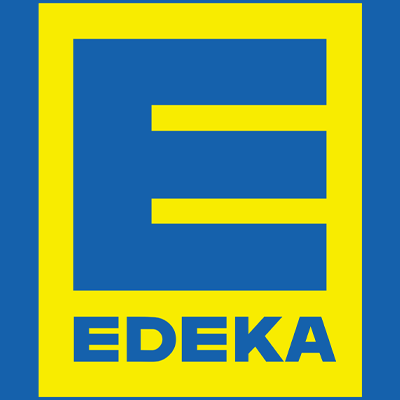 The organisation will negotiate on-top conditions with manufacturers across national borders. With combined sales of around 140 billion euros, Epic’s focus is on large international brand manufacturers. The alliance will not negotiate with SME suppliers or farmers.

Christian Verschueren, DG of EuroCommerce, the principal European organisation representing the retail and wholesale sector in Brussels, sees the new creation as an important way for retailers to be able to keep consumer prices reasonable. Among manufacturers, the new alliance caused a stir. The first talks are expected to take place in the coming weeks. 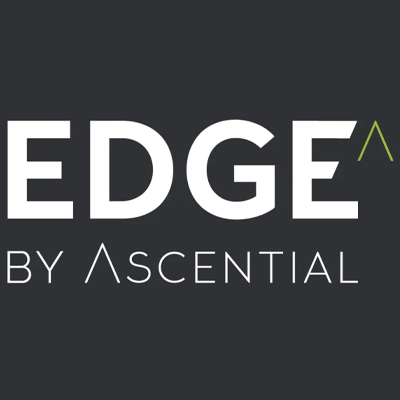 Analyst Edge by Ascential has released its annual European food retail ranking forecast for 2021. Three German chains top the list. Based on turnover, Schwarz Group is first with estimated revenues of 144.57 billion euros, for a growth of 5.3%. More than three quarters of the turnover can be attributed to its subsidiary Lidl. In second place, at a large distance, is Rewe, which is expected to grow by 4.5% to 81.33 billion euros this year. Third is Aldi, which is forecast to grow by 6.6% to a turnover of 75,48 billion euros. UK market leader Tesco is in fourth place, ending the year with 73,54 billion euros of sales, a decline of five percent. German market leader Edeka follows with a turnover of 69,87 billion euros.

The next four places are held by French retailers Carrefour, E. Leclerc,  Auchan and ITM (Intermarché), followed by Dutch Ahold Delhaize, which is expected to have a turnover of 35.5 billion euros. This corresponds to a growth of 8.3%, the highest growth among the top ten companies.